"Qualitative Exploration of the Creative Process of Actors"

To rekindle the dying art form of 'Hindi Theater',  Mr. Abhijeet Choudhary (Founder and Director) established “SWATANTRA THEATRE"  in Pune in the year 2006. Today, with great endurance it stands on a pedestal channeled towards contemporary notions and social issues.

Since its inception, Swatantra Theater, one of the leading Hindi Theatre groups in Pune, has endeavored in entertaining the audience with humorous, social and contemporaneous plays and has been ivited by leading Festivals and Institutions including National School of Drama's Bharat Rang Mohotsav 2019-2020, Armed Forces Medical College's Silhouettes, Deccan Literature Fest,  Film and Television Institute of India, National Defence Academy, Symbiosis Colleges of Media and Communication etc. The group has produced several Hindi productions which include innovative and exclusive production value, contemporary aesthetics and unique, contemporary content have been the attributes of each Swatantra Theater production.

Swatantra Theater's Children Online Theater Festival will be held from 16th April to 19th April 2021. Children are get set to bring the dash of Rajasthan in the Plays based on Vijaydaan Detha's short stories. The online training program started from 15th February where children from the ages 6- 12 were trained into the intricacies of Acting in the modules of Voice, Body and Acting techniques. Special modules were designed to suit the online medium. Per 5 Children were split into different breakout rooms with two trainers each to assure personal guidance also.

There have been technical issues too, bit beyond all of that the passion of children and trainers team together have created a perfect example of team spirit.

4 Plays based on 4 different Stories will be featured in this festival. Bada Kaun, Dujo Kabir, Fitrati Chor and a solo will be performed by Ojas Gawarkar based on ....... story by Detha.

The get ups, the backgrounds, the music also live singing and dancing around Rajasthani folk will be part of these plays.

At Swatantra, all our Children Productions are based on Indian Literature. In the past we have worked on Rabindranath Tagore, Premchand, Sudha Murthy, RK Laxman, Biopic of Dadasaheb Phalke etc so that we connect them to Indian Literature. The last season featured tales of Jataka, Panchatantra, Vikram Vetal, Andher Nagari Choupat Raja and then we picked Mulla Naseeruddin's stories adapted to Indian language and scenario where the Children got to learn and understand the beauty of Urdu Language.

As we all know Vijaydaan Detha who is an iconoclast storyteller and folklorist, Katha Chudamani and, has inspired and entertained us. Born in year 1926 and well known as Bijji, he has about 800 short stories to his credit along with poetry , essays and critiques. Padma Shri Vijaydaan Detha ji chose to write in his mother tongue though at some point ge was inspired by Russian literature. We can feel the aroma of our very own soil in his works.

As we all know Feminism in India is a set of movements aimed at defining, establishing, and defending equal political, economic, and social rights and equal opportunities for Indian women. It is the pursuit of women's rights within the society of India. Indian feminists also have fought against culture-specific issues within India's patriarchal society, such as inheritance laws and the practice of widow immolation known as Sati. Feminism is the recognition of the ‘wholeness’ of existence that encompasses all three – body, mind, and soul.

These topics are also dealt with in the Theater World. At Swatantra we will be celebrating Women's Day with the plays, Khamosh Adalat Jaari Hain and Panchi Aise Ate Hain written by Vijay Tendulkar. Vijay Tendulkar has modified the shape of Indian Drama with the Power of his pen to represent the issues that are temporal as well as timeless. In both of his plays, he shows the position of women in contemporary Indian society weaved in interesting plots. Leela Benare who is a central character from the play from Khamosh.. is an outspoken, bubbly woman in her late thirties who loves her teaching profession and so does love life. She has been betrayed in love and her other colleagues who are part of Drama- in- Drama don't compromise to showcase their cruelty because she is a single woman and probably is a would-be mother. Whereas the plot of 'Panchi Aise Ate Hain' is about a family who are trying hard to marry off their daughter Saraswati and constant rejections have forced the girl to try harder to impress every new groom that she has to meet. She starts feeling very unworthy of herself. Because probably according to the societal norms marriage can only make a female respected  A stranger who thinks of himself as a free bird happens to come to their house who gives Saru the formula to feel that she is worthy of every happiness and she is beautiful in her own unique way. Empowered Saru now takes on to express and state and decide what she has felt.

*According to the Government norms certain Rules of wearing a mask,

sanitization and maintaining social distancing will have to be followed

Post Pandemic things are returning to normal and Theaters have opened up.Swatantra Theater has been one of the most active Theater Groups. 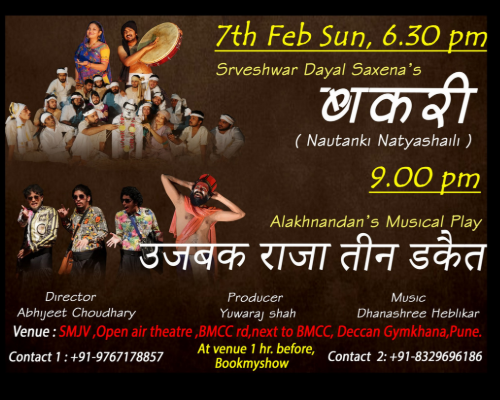 *According to the Government norms certain Rules of wearing a mask, sanitization and maintaining social distancing will have to be followed

Donar Passes will be available at 1hr. before  the venue

Come and Enjoy The Musical, Satarical, Situational, Socio and Comedy

Finally, after the Lockdown Swatantra Theater is all set to bring its

also available at Venue before 1hr.

According to the Government norms certain Rules of wearing a mask, sanitization and maintaining social distancing will have to be followed

Details & Form Link:  http://www.swatantratheater.com/acting-classes-in-pune.html
Every individual has their own unique style of carrying their body or playing expressions.It is very important to train actors helping them retain their own style and originality.At Swatantra Theatre we will have a mixed blend of practical and theoritical knowledge of acting and its techniques.
All this can give a deep insight and broaden a way of looking to the form of acting.It can prove a strong base.

(Based on Bikram Betal or Betal Pacchisi)

(Based on Jataka Tales)

The second Edition of the Quarterly Magazine 'Rang Aangan' on 14th Nov. 2020

the wonderful art of Theatre and Hindi Literature.

ACTING IS NOT FUN ....
"Theatre makes you A Serious, Self-Controlled Actor"

enrollment for a new course

on the works by Author Poet Sanjay Bharadwaj.

Swatantra Theatre has worked with important International partners
Showroom MAMA (1997) which is a platform for visual culture on the cutting edge of visual arts and popular culture based in Netherlands approcahed Swatantra to partner with them for a visual exhibition.
MAMA presents ‘Common Sadness’, a film written by the artists’ collective beyoncé (NL) and performed by Swatantra Theatre (INDIA). It will be presented as part of Intersections at Art Rotterdam from 4–8 February 2015. This cooperation is realised as part of the Outsourcing Performance project, from which, in addition this film, more results can be seen at Showroom MAMA on Witte de Withstraat.
Shot at the FTII (Main Theatre) under the Direction of Abhijeet Choudhary
A Musical Performance.

Swatantra's recent project on resilience of migrant community studied mental health with a different perspective. The methodology of Theater was used and a community theatre play was made. Along with De Montfort University ,Leicester. Excavate Theatre London, TISS, IHMP the research was carried out. Based in the entire process a film called as Suno Suno has been made. We are very happy to share it with all. After 2yrs of field work interacting with families and listening to their stories, we help the community put on a play about their stories and celebrate their lives.The underlying theme of the drama was to show to the communities that seeking help from the people you trust, showing compassion and teamwork all make for better mental health